The L.A. Music Center is celebrating its 50th anniversary this season with a number of commemorative events–including a rededication ceremony on October 1st to “celebrate the transformative role of the performing arts center in Los Angeles.” [1] So what does this have to do with the Cuban Missile Crisis? 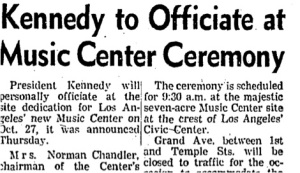 Few people, if any, know that President Kennedy was scheduled to officiate at the dedication of the L.A. Music Center in October 1962. It would have been the only major non-political stop for the President and First Lady during a multi-state campaign trip just before the midterm elections. Dorothy Chandler personally invited Kennedy to preside over the ceremony. Her desire to have him officiate was likely driven by competition with New York’s recently opened Lincoln Center for the Performing Arts–President Eisenhower presided over the Lincoln Center’s groundbreaking in May 1959. [2] Chandler knew Kennedy’s appearance would have brought international attention to Los Angeles and helped cement the city’s growing cultural reputation. The L.A. Music Center would have become a national symbol for the Kennedy Administration’s Cold War cultural agenda as well; but alas, the Cuban Missile Crisis intervened, causing Kennedy to cancel his appearance. [3]

Kennedy sent Chandler a telegram on Oct. 26th to express his regret:

It is indeed with deep regret that I cannot join you…you are, of course, aware of the events which keep me in Washington but I would like to say that even in difficult times it is important that Americans continue to pay attention to all facets of our national life. You…have performed a notable service to the people of southern California in launching this great cultural project. Mrs. Kennedy joins me in sending warmest regards. [4]

Chandler still managed to garner support for the Music Center from President and Mrs. Kennedy by asking them to endow seats in the Music Center’s Pavilion. They chose to endow four chairs. In her thank you note to the Kennedys, Chandler wrote that the gift “helped to heal my personal disappointment” for their absence the previous October. [5]

I have often wondered if President Kennedy had already prepared some remarks for the occasion, and if so, whether they are floating around in some distant archive. My other unanswered question is why did Kennedy agree to do it in the first place? Was this about campaigning, or truly about his Cold War cultural agenda? Jacqueline Kennedy’s support for culture and the arts is well-documented, and I wonder to what extent her interests influenced her husband’s administration. I’d love to hear your thoughts.

Dr. Andrea Thabet is a historian specializing in Los Angeles, urban, and public history, with a focus on urban renewal policy and cultural policy in the United States. Dr. Thabet has worked as a Curatorial Assistant at the Skirball Cultural Center and Museum in Los Angeles as well as at the Norton Simon Museum in Pasadena. She has taught college level courses in her areas of expertise, including a course on the U.S. Civil Rights Movement at the University of California, Santa Barbara, and America in the 1960s at the California Institute of Technology. Dr. Thabet has consulted on a number of historic preservation projects, which include a successful Historic- Cultural Monument nomination for the Hawk House designed by Harwell Hamilton Harris (2019), and research and writing about Civic Center Branch Administrative Centers for Survey LA, a city-wide project conducted by L.A.’s Office of Historic Resources. Presently, she serves as Co-Coordinator for the L.A. History & Metro Studies Group, based at the Huntington Library. Dr. Thabet holds a Ph.D and an M.A. in U.S. History from the University of California, Santa Barbara, and a B.A. in History with an Art History minor from Loyola Marymount University. She has presented her research at a number of academic conferences and public events. Dr. Thabet’s forthcoming article, “‘From Sagebrush to Symphony’: Negotiating the Hollywood Bowl and the Future of Los Angeles, 1918-1926,” will appear in the Pacific Historical Review in Fall 2020. Her published works on Los Angeles and urban history have appeared in both academic and popular journals, in both print and digital formats. In June 2020, Dr. Thabet was awarded a fellowship by Friends of Residential Treasures: Los Angeles (FORT:LA) for an interdisciplinary research collaboration with Jenna Snow, titled: “The House that Mary Built: The 1936 California House and Garden Exposition.” Dr. Thabet is currently working on a book manuscript based on her dissertation, "Culture as Urban Renewal: Remaking Public Space in Postwar Los Angeles." View all posts by Andrea Thabet, Ph.D.